Heals allied units at a range of 20 meters and a rate of 15 HP per second when the unit is idle (Twice as far and twice as fast as Valkyries).

Caladriae are flying myth units that have no attack but can heal other units. As a flying unit they can only be attacked by ranged units. This makes them an important part of an attacking army, especially if operating far from one's main base. They are the only land (more accurately flying) Atlantean unit with healing capabilities making them crucial in keeping an army in good shape. They make decent scouts due to their ability to fly but have low armor so they are quite vulnerable to ranged units. They are best used in groups. When supporting an army they can heal multiple units and can heal each other when scouting. Their marine counterpart (also gained via Oceanus) is the Servant.


Caladriae are flying healers. They make decent scouts but will fall easily to enemy towers and missiles. Making two Caladriae will allow them to heal one another so they can continue healing Atlantean armies.

"...Caladria died and was entombed. Theocrat Osphoru built a temple of healing over her tomb. Many thought his decision blasphemous, but all who suffered and were sick grew strong and hale again under the care of temple's healers. Blessed were the armies accompanied by these followers of Caladria, for they were healed, inspired and protected."

-- Voices of the Oracle, The Lay of Ioleta 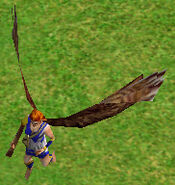 The Caladria is also ideal for exploring.

A fallen Caladria
Add a photo to this gallery
Retrieved from "https://ageofempires.fandom.com/wiki/Caladria?oldid=268219"
Community content is available under CC-BY-SA unless otherwise noted.