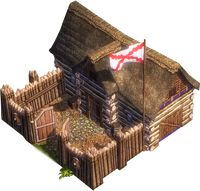 Home City Cards can send over buildings that wouldn't be available to a civilization by default. These buildings come in the form of wagons.

Advancing in age grants a LOS upgrade to buildings :