Age of Empires Series Wiki
Register
Don't have an account?
Sign In
Advertisement
in: Age of Empires, Infantry, Bronze Age

All except Egyptians, Greeks, and Yamato

The Broad Swordsman is stronger than the Short Swordsman and is an upgrade available immediately after reaching the Bronze Age. Only three civilizations in the game cannot upgrade to the Broad Sword. It has more hit points and attack, making it useful in the Bronze Age, being better equipped to stand up to cavalry. However, their speed still poses a problem, making them vulnerable to archers, just like Short Swordsmen. However, they do make a good army when massed for a Bronze Age assault. 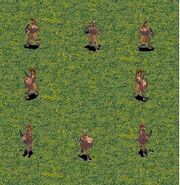 A group of Broad Swordsmen, facing all possible directions.

A group of Gaia-controlled Broad Swordsmen

A Broad Swordsman in the Definitive Edition