The Boyar is a heavily armored cavalry unit, enabling them to absorb a lot of damage. Still, they have a lower amount of hit points than the Paladin. However, their attack is heavy, and their melee armor is unparalleled in the cavalry branch. These properties make them extremely hard to take down solely with melee attack.

Getting a good number of Boyars requires having multiple Castles to sustain a good production (in fact, the really quick training time of the Boyar of 15 seconds equates to a Knight production from two Stables), and researching the Castle Age unique technology Detinets turns the Castle cost from 650 stone to 260 wood and 390 stone, thus making Castles more accessible and massing Boyars easier, especially in the Imperial Age, when stone starts to be more scarce, while also securing map control.

With statistics rivaling other cavalry civilizations' early Imperial Age Cavaliers, the Boyar in many ways outclasses some of the toughest Castle Age units such as Knights, Cataphracts, and Konniks. With their sheer bulk, they can even stand up to Camel Riders and Pikemen, although they are not cost effective in these match-ups. Since they are expensive and are Castle units, they are hard to mass. Their power combined and cost make Monks a good option to counter them.

Before update 36906, Boyars only had 1 base pierce armor (2 for Elite). Boyars were vulnerable to massed archers such as Crossbowmen and Plumed Archers. The Genoese Crossbowman deserves a separate mentioning here since it possesses an attack bonus against cavalry. Due to the patch, Boyars are now as hardy against archers as the Knight line, though their Elite version does have 30 less HP than a fully upgraded Paladin.

Since the Slavs are unfortunate enough to lack Heresy, Boyars are somewhat prone to conversion. This was worse before the Definitive Edition, since they also lacked access to Faith as well. Especially in the Castle Age, when Boyars may need 4 hits to strike down a Monk with Sanctity, a Boyar cannot hope to kill an enemy Monk if they meet alone. Hence, they are likely to be picked as a target for a conversion. In the Imperial Age, Faith can help the Elite Boyar win fights against Monks, as they will only need 3 strikes to kill a Monk, but it is a risk that should be avoided.

Civilizations with Camel Riders can freely use them against Boyars and rest assured to field a cost effective unit. Mamelukes can also be used. Against the Slavs, however, Camel Riders are not of much use anywhere else, since they fall to any other unit of the Slavic army.

While Boyars excel in melee fights against other heavy cavalry, the exception is found with the Lithuanian unique unit, the Leitis. The Leitis' attack ignores melee armor, which makes them a huge threat against the Boyars, though Boyars have higher hit points than Teutonic Knights, so they can survive a bit longer, but remain a primary Leitis target.

Boyars are very effective facing most infantry units, but the Obuch, the Polish unique unit, can pose a major threat to them, as every of the Obuch attack's remove armor by 1/1. While in an individual battle, Boyars still win due to their high hit points and attack, in large and prolonged battles the Boyar's armor will start to decline severely, thus their main advantage is gone. They are then vulnerable to not only Obuchs' attacks, but also attacks from other units like archers.

The Dravidian unique unit, the Urumi Swordsman, is another threat at the same level as Leiciai and Obuchs, as is trained fast, is cheaper, and after Wootz Steel is researched, the attack ignores armor, in conjunction with the charge attack (which ignores armor too) and even the hidden splash damage with the charge attack (which guarantees a 5 damage to nearby units), puts the Boyar in a terrible position.

In the Imperial Age, the Elite Boyar has 3 base pierce armor, the same as a Paladin. The Paladin, however, has 30 HP more than the Elite Boyar, which makes it even more suitable against archer fire. However, countering an archer army in the Imperial Age is not a problem for the Slavs, since they have Siege Rams and Siege Onagers with Siege Engineers.

In the Definitive Edition, Boyars' training time is reduced to 15 seconds (both standard and elite).

With update 36906, Boyars get +1 pierce armor (both standard and elite), making them much better at soaking arrow damage and a strong counter against archers. However, their speed is reduced to 1.3, so they can still be countered by well micromanaged archers (especially mounted archers) and Monks.

With update 50292, Elite Boyars get +2 melee armor, making them even stronger against melee units.

With all upgrades, the Elite Boyar gets 11/7 armor (the same pierce armor as a fully upgraded Paladin and only 2 less melee armor than a fully upgraded Elite Teutonic Knight), making them one of the best armored units in the game. 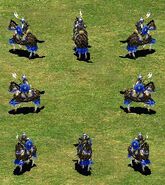 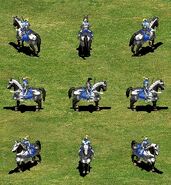 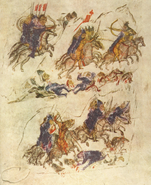 Kievan Rus' under Sviatoslav I chasing Bulgarians, from Manasses Chronicle

Boyar in the HD Edition and Definitive Edition