The Bow Rider is a mounted archer in Age of Empires III: The WarChiefs that is unique to the Lakota and can be trained at the Corral.

The Bow Rider is best used against heavy cavalry units as a group of them should easily take down an enemy's group of heavy cavalry. They can also be used to fend off Heavy Infantry due to their good resistance toward melee damage and high speed.

Unlike other ranged cavalry, Bow Riders lack the 0.5 multiplier against Villagers, so they are among the best at harassing an enemy's economy, third only to Apache Cavalry (with Apache Raiders) and to Cavalry Archers with the "Irregulars" Home City Card. They should be escorted with Tokala Soldiers and/or Axe Riders, who can attack ranged infantry units, while also assisting at killing the Villagers.

Bow Riders can be trained at the Corral, at the Commerce Age, unlike other similar units. This encourages Rushing, despite their high food cost. It is highly recommended to accompagny Bow Riders with the Lakota War Chief, as he provides a speed bonus that allows them to outrun most enemy units.

A severe drawback of this unit, meant to balance the lack of a 0.5 multiplier against Villagers, is that there are no shipments of Bow Riders available to a Lakota player, unlike Axe Riders and Rifle Riders. This, combined with their high food cost, means that they require close micromanagement; they shouldn't be sent into groups of enemies without a specific purpose.

As Bow Riders are unique to the Lakota, only technologies that they have access to are shown in the following table:

As Bow Riders are unique to the Lakota, only their cards and other civilizations' TEAM cards are shown in the following tables: 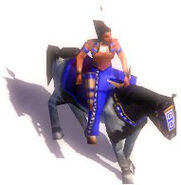 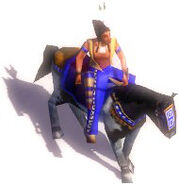 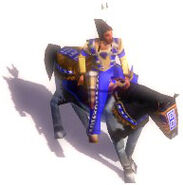