Age of Empires Series Wiki
Register
Don't have an account?
Sign In
Advertisement
in: Maps, Age of Empires III, The Asian Dynasties

Borneo is a map in Age of Empires III: The Asian Dynasties, based on one of the largest islands in the world.

Borneo is a large island map, not unlike Hispaniola, but very different in practice. It is found to the southeast of Indochina.

Borneo is a lush, tropical island with extremely abundant resources, both on land and on sea. It features at least one Trade Route (more in team games),

Players start to the coastal regions, with waters completely revealed (Water Treasures included) and are presented with an interesting dilemma: focusing either on land or on sea. On one hand, the lush center of the island is filled with Treasures, Gold Mines and Trading Post sites, and many trees. On the other hand, the waters around Borneo are very rich in Fish, Whales and Water Treasures. Either way, the player must expand continuously to exploit Borneo's riches, while also denying them to enemies.

The map, when the land is revealed.

The map at its normal, with revealed waters, but hidden land. 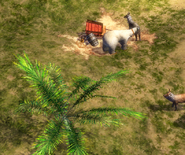 The center of Borneo is filled with Dense Jungle and Wild Elephants
Community content is available under CC-BY-SA unless otherwise noted.
Advertisement