The Bombard Cannon is a long-ranged gunpowder siege unit in Age of Empires II that can be trained at the Siege Workshop in the Imperial Age once Chemistry is researched.

The Houfnice, an upgrade only available to the Bohemians, features in the Definitive Edition.

The * indicates that the civilization can fully upgrade their Bombard Cannons, i.e. gets Siege Engineers. Faith and Heresy are not taken into account because they only contribute to their combat strength in a very situational manner.

The ^ indicates that the civilization has at least one civilization or team bonus or a unique technology that benefits the combat strength of the Bombard Cannon.

The - indicates that the civilization had the unit in previous versions of the game but currently does not.

The Bombard Cannon is very powerful. It outranges all ranged buildings apart from Teutonic Castles, Korean towers, and Turkish Bombard Towers. A group of Bombard Cannons can effectively destroy a town in a matter of minutes, provided that they are adequately protected. Bombard Cannons are a powerful counter to siege units like Scorpions and Onagers, and can be effectively used against enemy ships and archers, but they are weak against non-ranged units, particularly Knights. They are also a great counter to Trebuchets, but should be moving while dealing with them in order not to be hit. Like Mangonels, Bombard Cannons have friendly splash damage and must be used with caution.

Comparison to the Trebuchet[]

Comparing their attacks, Bombard Cannons are more accurate and deal splash damage against units, but have shorter range and can damage friendly units. They deal significantly less damage to their targets than Trebuchets, but fire faster and with much faster projectiles. Overall, Bombard Cannons are superior to Trebuchets in terms of versatility as they are effective against both buildings and units, but the Trebuchet's greater range and attack are unrivaled when it comes to taking down enemy buildings.

Dawn of the Dukes []

There are two heroes in the game with the appearance of a Bombard Cannon:

A group of Bombard Cannons.

Bombard Cannons destroying an enemy fortification from a safe distance. 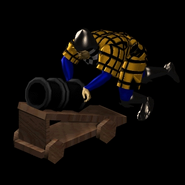 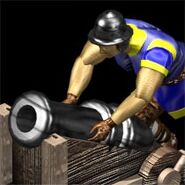 A full render of the Bombard Cannon unit icon.

Sprite of the unit in the Definitive Edition.
Español
Community content is available under CC-BY-SA unless otherwise noted.
Advertisement