Bohemond I of Antioch

6
Bohemond (full title: Bohemond I of Antioch) (c. 1054 – 3 March 1111) is a cavalry hero unit in Age of Empires II: Definitive Edition - Lords of the West. He appears as a unique cavalry unit wielding a shield and axe, which is different from most other cavalry in the game that usually wield a sword or spear. As a hero, he cannot be converted and can regenerate health.

He appears in the scenarios Bohemond and the Emperor and Bohemond in the East in the The Grand Dukes of the West campaign.

Bohemond I of Antioch (c. 1054 – 5 or 7 March 1111), also known as Bohemond of Taranto, was the prince of Taranto from 1089 to 1111 and the prince of Antioch from 1098 to 1111. He was a leader of the First Crusade, leading a contingent of Normans on the quest eastward. Knowledgeable about the Byzantine Empire through earlier campaigns with his father Robert Guiscard, he was the most experienced military leader of the crusade.

His parents were related within the degree of kinship that made their marriage invalid under canon law. In 1058, Pope Nicholas II strengthened existing canon law against consanguinity and, on that basis, Guiscard repudiated Alberada in favour of a then more advantageous marriage to Sikelgaita, the sister of Gisulf, the Lombard Prince of Salerno. With the annulment of his parents' marriage, Bohemond became a bastard. 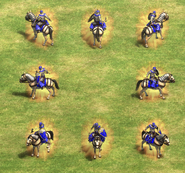