Age of Empires Series Wiki
Register
Don't have an account?
Sign In
Advertisement
in: Age of Mythology, Foot archers, Norse units,
and 2 more

18 feet
The Bogsveigir is an archer unit for the Norse in Age of Mythology. It was added in the v2.0 patch, and the Tale of the Dragon expansion. It can be trained at the Hill Fort in the Heroic Age or in the Classical Age on the Sea of Worms random map, and is good against myth units.

This unit was added in order to better face enemy myth units, especially flying ones (such as the Stymphalian Bird), but also because the Norse lacked a dedicated archer unit.

Unlike the Throwing Axeman, the Bogsveigir causes pierce rather than hack damage, and is also superior in almost any stat, save for cost (they cost 30 extra wood) and hack armor. Still, they are not as strong against infantry, as they lack an anti-infantry bonus, but their great range more than makes up for it.

When behind cover, such as Stone Walls, and in groups, they can become alarmingly dangerous, as they will abuse their range to snipe enemies from afar, and even stave off myth unit assaults. If a player plays on a defense-oriented map, such as Jotunheim or Deep Jungle or in Sea of Worms (where they are available in the Classical Age), it is recommended to largely substitute, but not to completely replace the Throwing Axemen.

Concerning their anti-myth unit role, Hersirs are better at fighting land units (except for fast units such as Centaurs), but the Bogsveigir are the only units who can face flying units, other than Throwing Axemen, and the only ones who can attack distant naval myth units such as Krakens. Bogsveigirs are probably a Norse player's greatest asset when fighting a Titan, as the Norse's other anti-myth unit options, Jarls and Hersirs, can only engage in melee combat. It's usually best to have a force of infantry, such as Ulfsarks and Hersirs, bog down the titan while having several Bogsveigirs rain arrows on it. 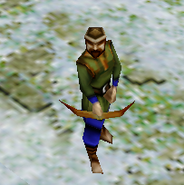