x2.0 vs. Heavy cavalry and Coyote Runner
x2.5 vs. Artillery

The Black Rider is a mercenary light cavalry in Age of Empires III. The Black Rider fights on horseback, wearing black armor, and wields powerful handguns.

The Black Rider is a swift unit with a reasonable long range attack which can also take a lot of hits due to their substantial armor. Like its basic version, the Dragoon, the Black Rider is a type of ranged counter-cavalry unit. It is also good for killing enemy Artillery. With 12 Missionaries (Japanese ally), Unction, all attack improvement upgrades and cards (German and Indian allies), the Spanish German Black Rider is the ranged cavalry with the highest ranged attack, 100.32.

The Black Rider, similar to the units of the Germans, speaks modern Standard German with a standard theater pronunciation ("Bühnendeutsch"), although this does not represent the form of German spoken in the Age of Empires III timeframe. 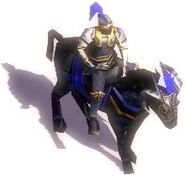