In Age of Empires, birds can be hunted down by a Villager. Once the animal is killed, it creates an impact similar to a crashing projectile of a siege weapon. The birds have 4 hit points but do not contain any food. The Following birds appear in Age of Empires:

Once again, certain non-interactable birds make their appearance in the second game. The following decorative birds appear in Age of Empires II:

They are all available in the Scenario Editor and have 1 HP.

Age of Empires II also features a military bird unit: The Penguin. It is an infantry unit that can only be obtained in the Scenario Editor or by entering the cheat code 'i don't exist'.

Icon used by all birds before the Definitive Edition. 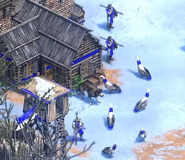 Geese in the Definitive Edition.

Animated sprite of a Hawk flying.
Add a photo to this gallery

In Age of Mythology, non-edible birds are more interactive, as they count as units and can be killed on some occasions, most notably when a Zeus player invokes Lightning Storm. These birds include Hawks and Vultures, which appear on snowy/grassland and desert maps, respectively. On the other hand, Seagulls are set as embellishment objects, not as units. Tale of the Dragon introduced Parrots that appear in Jungle maps.

Not unlike Age of Empires II, two edible birds make their appearance; the Chicken and the Crowned Crane, both as huntables. Tale of the Dragon also introduces Ducks, which are similar to Chickens. The Domestication technology, available to followers of Fu Xi, increases the gather rate for Ducks and Chickens by 30%, making this the only technology that affects the gather rate for specific huntables.

Harpies (appearing on maps set in the Underworld, such as Erebus or River Styx) also interact similarly to Vultures and Hawks but count as monsters rather than birds.

Originally Harpies were intended to be Hades' unique scout (appearing as the Harpy Scout in the Tale of the Dragon Scenario Editor) and Vultures as Egyptian flying scouts.

Apart from two edible birds, the Rhea and the Turkey, the game also features an enormous variety of decorative birds, whose appearance varies on the featured maps, often their native habitats. It should be noted that they technically count as units, and can be moved around in the Editor, but are otherwise non-interactable and cannot be hunted.

These birds are non-edible and only serve decorative purposes; they are all available in various maps and are also provided in the Scenario Editor:

Concerning the edible birds, it should be noted that Turkeys provide 500 food, and are easily killed by a Blunderbuss-boosted Settler, so it is recommended to prefer Turkeys, rather than foraging Berry Bushes or hunting Capybaras on maps that have them (such as Yucatán or Caribbean).

Rheas on the other hand provide 400 food and are found in large herds, similarly to most huntables, such as Deer.

A unit called "bird" (with the appearance of three black birds on the ground) is introduced in Age of Empires III: The Asian Dynasties but appears only in campaign cinematics, usually to fly away when disturbed by coming human units. When selected in the Editor, however, the bird is revealed to have the Turkey's icon and 400 food.

A flock of Buzzards in Sonora

A Condor flying over the Painted Desert

The Condor in the Scenario Editor

The Eagle in the Scenario Editor

A group of Swans in-game

A small group of Swans swimming in a pond in Act I: Japan

A Vulture in the Great Plains, flying above some Pronghorns

Vultures resting on a tree; note the Vulture on the ground
Add a photo to this gallery
Retrieved from "https://ageofempires.fandom.com/wiki/Bird?oldid=272429"
Community content is available under CC-BY-SA unless otherwise noted.