The Bersagliere (plural Bersaglieri) is a ranged gunpowder infantry in Age of Empires III: Definitive Edition - Knights of the Mediterranean that is unique to the Italians.

The Bersagliere is a ranged infantry unit that replaces the Skirmisher for the Italians. It is effective against heavy infantry and light cavalry, but vulnerable against cavalry and artillery.

Compared with Skirmishers, Bersaglieri have less melee attack, -10% ranged resistance, a slightly increased coin cost and training time, but move faster, have a slightly higher ranged attack, and deals ×3 additional damage against light cavalry. However, they are not available until the Industrial Age, which means that players must develop a "Fast Industrial Age" strategy in order to age up in early-game matches.

Due to their increased movement speed, Bersaglieri can perform hit-and-run tactics more easily than other long-ranged infantry and retreat faster if the enemy outnumbers them. But even being faster than many infantry units, hand cavalry like the Hussar is able to reach and take them down more easily, and artillery units like the Falconet can defeat Bersaglieri if they are within their range.

Bersaglieri can perform a better role countering heavy infantry than Pavisiers, although it is recommended to build an Arsenal and research Counter Infantry Rifling for an effective increased attack against these units. While Pavisiers get different resistances from each stance, Bersaglieri prove to be useful support units thanks to their Bugle Call ability, which increases the speed of nearby units after they defeat an enemy unit.

As Bersaglieri are unique to the Italians, only technologies that they have access to are shown in the following table:

As Bersaglieri are unique to the Italians, only their cards and other civilizations' TEAM cards are shown in the following tables:

Bersagliere image from the Compendium section 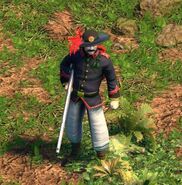 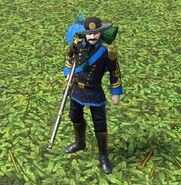