Berry Bushes or Forage Bushes are an early food source and appear in every game of the series.

The Berry Bush in Age of Empires provides an early source of food from Stone Age to early Tool Age. Each Bush yields 150 food. The biggest advantage of these Bushes is that unlike animals, which flee whenever a unit approaches them, the Bush is fixed to the ground for the entire game, making resource gathering easier to micromanage, but slightly less efficient.

As the game progresses, Berry Bushes may become rare or even run out. This is where Farms come into the picture as they provide more food than the Bushes itself and can always be replaced whenever a sufficient supply of wood is available.

Like its predecessor, the Forage Bush in Age of Empires II provides an early source of food. Forage Bushes always appear in clusters, and there is usually a cluster near every player's starting Town Center.

On most maps, there are several other Forage Bush clusters scattered around the map. Each Bush contains 125 food. It is advisable to gather food from animals first before gathering from Bushes since the working speed of Foragers is slower. However, foraging is still faster than farming.

In The African Kingdoms, the Fruit Bush was introduced. It only differs from the Forage Bush in its appearance.

The Berry Bushes in Age of Mythology contain 100 food, and like in the other games, clusters of them can sometimes be found close to the Town Center. They are a slow, but safe method of gathering food.

"Berry bushes symbolize the gathering nature of pre-agricultural humans and are a staple of Age of Empires games. Berries, like all fruit, evolved as a means for plants to disperse their seeds--in this case through the digestive tracts of animals."

The Age of Empires III Berry Bush holds 1,000 food and is harvested by Settlers, Villagers, Coureur des Bois, Cree Coureur des Bois, or Settler Wagons. The Berry Bush, unlike animals, do not lose food over time due to decay, but the gather rates are slower (the same as a Mill, except for the French).

Berry Bushes usually come in clusters of 2-4, and last a considerable amount of time to European and Asian civilizations. Most maps usually have a cluster of berry bushes near them as an early source of food.

They should not be used by the French Coureur des Bois, or those utilizing Cree Coureur des Bois due to the fact both units gather berries slower than working at a Mill. Furthermore, major Native American civilizations should always use hunting (spawning new animals as the Sioux, or Iroquois via cards), fishing, and berries for as long as possible due to the inferiority of the Farm to berries, Mills, and fishing.

"There are many varieties of berries native to the Americas. Tart cranberries grow in cranberry bogs, flooded at harvest time to float the ripe berries to the surface where they are skimmed off and dried or put into preserves. Thorny blackberry bushes grow wild in the southern United States. The Guarana berry grows in the northeastern parts of South America and is named after the Guarani tribe."

A Forager harvesting berries in Age of Empires

Foragers in Age of Empires II 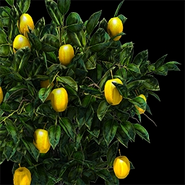 Fruit Bush in in Age of Empires II: Definitive Edition

Berry Bushes in Age of Mythology 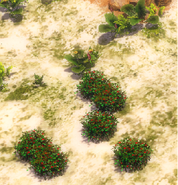 Berry Bushes in Ceylon in Age of Empires III
Add a photo to this gallery
Retrieved from "https://ageofempires.fandom.com/wiki/Berry_Bush?oldid=263582"
Community content is available under CC-BY-SA unless otherwise noted.