4
Bernard d'Armagnac (1360 – 12 June 1418) is a cavalry hero unit in Age of Empires II: Definitive Edition - Lords of the West. He appears as a unique cavalry unit wielding a lance, and is similar to a Frankish Paladin with more gold plating on its armor and barding. As a hero, he cannot be converted and can regenerate health.

He is featured as a player in the scenarios The Wolf and the Lion and The Cleansing of Paris (the latter of which he appears as a unit) in the The Grand Dukes of the West camapign.

After Louis' assassination in 1407, Armagnac remained attached to the cause of Orléans. He married his daughter Bonne to the young Charles, Duke of Orléans in 1410. Bernard d'Armagnac became the nominal head of the faction which opposed John the Fearless in the Armagnac–Burgundian Civil War, and the faction came to be called the "Armagnacs" as a consequence.

He became constable of France in 1415 and was the head of the government of the Dauphin, the future Charles VII, until the Burgundians invaded Paris in the night of 28–29 May 1418. On 12 June 1418, he was one of the first victims of the massacres in which anywhere between 1,000 and 5,000 of his real or suspected followers were killed in the course of weeks throughout the summer. 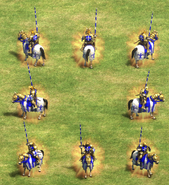