Age of Empires Series Wiki
Register
Don't have an account?
Sign In
Advertisement
in: Cheat units, Age of Mythology

Buildings (5)
Units(5)
Bella is a cheat unit in Age of Mythology: The Titans. 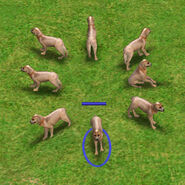 Eight Bellas facing various directions. The one facing right is in a sitting position, which is part of her bored animation.
Community content is available under CC-BY-SA unless otherwise noted.
Advertisement