4
Belisarius is a cavalry hero available in the Scenario Editor in Age of Empires II. As a hero, he cannot be converted and can regenerate health (since The Conquerors).

Originally, he had the appearance and icon of a Cataphract, but he received a unique icon in The Forgotten. In the Definitive Edition, his appearance is changed to a Centurion.

Belisarius has higher HP than a Cataphract, but a weaker armor and attack. He is affected by all upgrades and any other bonuses that affect cavalry units.

Belisarius (Greek: Βελισάριος, c. 500 – 565 A.D.) was a Byzantine general under Emperor Justinian the Great. Regarded as one of the best generals of his time, he fought several battles against the Persians and reconquered much of the former Western Roman Empire including the city of Rome. 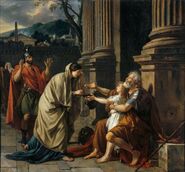 Belisarius Begging for Alms, by Jacques-Louis David (1781), based on a Medieval legend that claimed Belisarius lived his last days as a blind beggar in Rome.

Possible contemporary portrait from Basilica of San Vitale, in Ravenna, modern Italy
Add a photo to this gallery
Retrieved from "https://ageofempires.fandom.com/wiki/Belisarius?oldid=269124"
Community content is available under CC-BY-SA unless otherwise noted.