Bayou is one of the maps featured in Age of Empires III.

There are always 4 Cherokee and Seminole villages, that occupy islands through the middle of the map.

Buildable land is a premium in the swamps, as there is very little to build on. It's very hard to build proper defenses, as the marsh will prevent players from building an ideal defense. While Docks are buildable, navies cannot be deployed as the water is too shallow for them.

To compensate for the marshland, there are both Seminole and Cherokee tribes, both of which are very powerful.

There's plentiful resources on the map, from silver mines to herds of animals. The only real problem is that they're scattered throughout the map, making Turkeys hard to spot in swamps. There are few mines and herds near the players to begin with, making it surprisingly simple to raid an enemy. 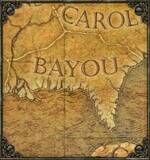 Appearance of the map

A Monitor navigating in the Bayou
Add a photo to this gallery
Retrieved from "https://ageofempires.fandom.com/wiki/Bayou?oldid=293576"
Community content is available under CC-BY-SA unless otherwise noted.