Age of Empires Series Wiki
Register
Don't have an account?
Sign In
Advertisement
in: Age of Empires II, Cavalry heroes, Bayinnaung,
and 2 more

Bayinnaung is a campaign in Age of Empires II HD: Rise of the Rajas. It is based on the exploits of Bayinnaung Kyawthin Nawratha (Burmese: ဘုရင့်နောင် ကျော်ထင်နော်ရထာ; 1516 – 1581), a king of the Burmese Toungoo Empire from 1550 to 1581. Among his feats depicted in the campaign include the subjugation of the Shan and Mon peoples under Burmese hegemony and the conquest of modern-day Thailand and Laos through what was called "the greatest explosion of human energy ever seen in Burma", which results in him presiding over the largest empire in Southeast Asian history as the self-styled Cakkavatti (Sanskrit for "Universal Ruler"). His legacy continues to be remembered not only in Burma, but also in Thailand and Laos.

5
Bayinnaung is the titular hero of this campaign, and is also accessible in the Scenario Editor. He is represented by a slightly modified Elite Battle Elephant with slightly improved HP and attack and appears in all scenarios. As a hero, he can regenerate health and cannot be converted. He deals his full attack as trample damage.

The Bayinnaung campaign consists of 5 scenarios. The player plays as the Burmese, and the player color is green.

The campaign is narrated by Bayinnaung himself except in the outro of the final scenario, where one of his sons (either Nanda or Thinga Dathta) speaks of Bayinnaung's death and legacy instead.

Rise of the Rajas box art with Bayinnaung to the right, next to Gajah Mada

A statue of Bayinnaung 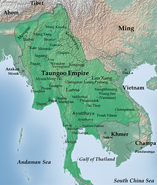 The maximum extent of the Toungoo Empire under Bayinnaung 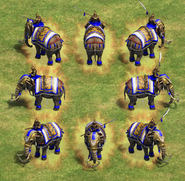 Bayinnaung in the Definitive Edition
Community content is available under CC-BY-SA unless otherwise noted.
Advertisement