+4 vs Building
+4 vs Stone defense

The Battle Elephant is a cavalry unit in Age of Empires II HD: Rise of the Rajas that can be trained at the Stable once the Castle Age is reached. It is a slow yet very powerful and resilient cavalry unit, in some way similar to the War Elephant, but weaker and cheaper. It is considered a regional unit as it is only available to the four Rise of the Rajas civilizations: Burmese, Khmer, Malay, and Vietnamese, as well as the Bengalis and Dravidians, two of the new civilizations introduced in Dynasties of India. All civilizations that have access to Battle Elephants (except the Dravidians) can upgrade them to Elite Battle Elephants and have special bonuses and/or technologies that benefit them. Battle Elephants deal 25% trample damage.

Similar to Persian War Elephants, but on a lesser scale, the Battle Elephants are tough, durable and costly. They move slowly and are vulnerable to units that deal damage at range, but are also good as a meatshield for allied ranged units. As elephant units, they are also vulnerable to enemy Pikemen and Kamayuks. Mamelukes are particularly effective against them. They can be easily converted by enemy Monks, so they should be deployed with supporting units, preferably units with range. Further, Flaming Camels deal bonus damage for a total of 200 damage (before armor and blast distance are taken into account) against Elephant units, and are thus extremely lethal against packed groups of Battle Elephants.

Bengali Battle Elephants take -25% bonus damage and are more resistant to conversion, attack 20% faster with Paiks, and get all upgrades from the Blacksmith and Stable, which makes them a formidable force, as Pikemen and Monks are less effective. They are also more effective in melee combat and taking down buildings. However, Bengali lack access to Heresy.

Since Bengali Elephants are more resilient against their counters, Bengalis are more encouraged to rush with them.

Dravidian Battle Elephants have high durability between combats with Medical Corps, which allows them to regenerate 20 HP per minute, but lack several technologies, including Bloodlines, Husbandry, and Plate Barding Armor, and also cannot be upgraded into Elite Battle Elephants. However despite the lack of those upgrades, they can also upgrade their Battle Elephants with Wootz Steel, which enables this unit to ignore enemy armor, making it very threatening, even in the late game. Due to lack of Husbandry and Heresy, their Battle Elephants are an extremely attracting target for Monks. Lacking Husbandry and Plate Barding Armor and the elite upgrade makes them too slow to catch up and very vulnerable against ranged units.

It is possible for the Khmer to perform a "Battle Elephant rush", but it requires a strong economy early in the game.

The Malay have cheaper Battle Elephants, costing -30% in the Castle Age (84 food and 49 gold) and -40% in the Imperial Age (72 food and 42 gold). This, combined with their civilization bonus that makes them Age up with relative ease, enables them to get the Battle Elephants out on the field astonishingly quickly. Combined with archers to deal with Pikemen and Monks, an early Castle Age visit of a dozen of them can prove very unpleasant to any ill-prepared town. Later on, they become much less dangerous, lacking Bloodlines and Chain Barding Armor, but as they become even cheaper in the Imperial Age, they are still ready to be used, especially considering that the Malay are the only civilization with access to Battle Elephants who have Heresy.

Similarly to the Khmer, the Malay can perform a Battle Elephant rush.

The Vietnamese Battle Elephants are the most tanky of them all as they get another 100 HP out of the Chatras technology. They also get full armor from the Blacksmith, as well as Bloodlines (and Husbandry in the Definitive Edition) from the Stable. That makes them perfect for the Vietnamese, as they can act as meat shields to protect their excellent archers. The fact that they lack Blast Furnace does little harm in the Vietnamese case.

Comparison in the Castle Age with all upgrades[]

A group of Battle Elephants

The Battle Elephant (on the left) and its Elite counterpart

A Battle Elephant in the Definitive Edition

Khmer army going to war against the Cham; relief at the Bayon-temple in Angkor, Cambodia (late 12th to beginning 13th century) 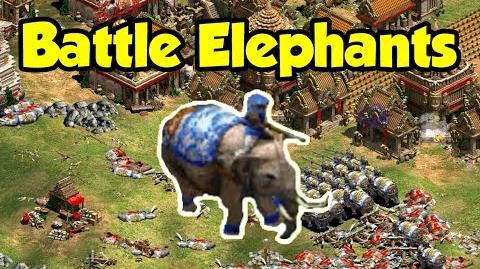