Bass are a very diverse group of fish that can be fished in Age of Empires III.

Despite being a common global species of fish, Bass surprisingly are only found in the Amazonia map. Bass yield 500 food, as with other species of fish.

A large number of game fish share the name "Bass." One group of Bass, Black Bass, is very prevalent throughout the United States. Mostly east of the Rocky Mountains. Among the various types of freshwater Bass are the largemouth, small mouth, striped and white, and some unrelated marine species are called Bass as well.

Sportsmen enjoy fishing for bass because the fish are strong fighters. Bass are known to leap out of the water to catch a lure before it even hits the water. In addition, Bass are often fished because their meat is enjoyed due to its firm texture.

Male bass take on active role in the care and raising of the young. They build the nest and gaurd it until the eggs are hatched. They stay and protect the young fish(called "fry") until they are able to leave the nest on their own."
—In-game history 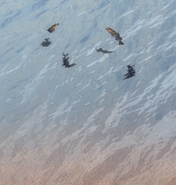 Bass seen in the Amazonia

The Bass history portrait
Add a photo to this gallery
Retrieved from "https://ageofempires.fandom.com/wiki/Bass?oldid=279514"
Community content is available under CC-BY-SA unless otherwise noted.