The Basilica is a building in Age of Empires III that ships powerful Papal allies and boosts nearby building construction speed. It can only be built by the Italians.

The Basilica enables Papal military units, increases the speed of nearby building construction and generates 1 XP per second.

As the Basilica is unique to the Italians, only technologies that have access to are shown in the following table:

As the Basilica is unique to the Italians, only their cards and other civilizations' TEAM cards are shown in the following tables:

Basilica image from the Compendium section 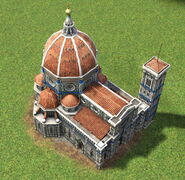 In-game Basilica in the Commerce/Fortress Age 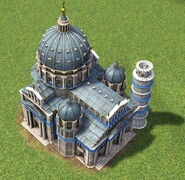 In-game Basilica in the Industrial/Imperial Age