Produces and researches upgrades for soldiers.

1,200
The Barracks is an Egyptian building in Age of Mythology. It is first available in the Classical Age, and is where basic Egyptian military units are trained and where technologies that improve them are researched. 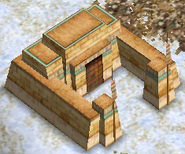 Barracks
Add a photo to this gallery
Retrieved from "https://ageofempires.fandom.com/wiki/Barracks_(Age_of_Mythology)?oldid=277388"
Community content is available under CC-BY-SA unless otherwise noted.