Age of Empires Series Wiki
Register
Don't have an account?
Sign In
Advertisement
in: Mercenaries, Infantry, Age of Empires III,
and 2 more

The Barbary Corsair attacks with a large scimitar - a curved sword used across the Arabic world - and uses flaming torches to attack buildings, like most other units. Because Corsairs are melee heavy infantry, they are best at fighting cavalry units and are fairly effective against other heavy infantry units, but, for melee heavy infantry, it is relatively weak against buildings. Corsairs have an exceptional speed for infantry, only surpassed by the Spy and the Coyote Runner.

3.0
The Buccaneer Captain is a Treasure Guardian variant of the Barbary Corsair. With a siege damage of over 100, it is good at destroying buildings and ships. It only appears in the Pirates! scenario of Act I: Blood. This unit is also accessible in the Scenario Editor under the Units category, as "GRD Buc Captain".

A variant of the Barbary Corsair appears in the Algiers scenario of the Historical Battles, serving as a replacement for the Rodelero. He has less hit points, less attack, is not tagged as mercenary, and gives less experience when trained or killed, but can be trained in the Commerce Age, costs less resources and population, and trains in less time than his equivalent. This variant of the Barbary Corsair is also accessible in the Scenario Editor under the Units category, as "SPC Barbary Corsair".

The Barbary Corsair and the Buccaneer Captain speak Kabyle language. 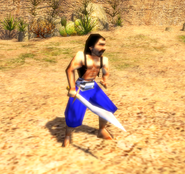