Age of Empires Series Wiki
Register
Don't have an account?
Sign In
Advertisement
in: Age of Empires III, Exploration Age, Dutch,
and 3 more

The Bank is an economic building in Age of Empires III that is unique to the Dutch. It generates 2.75 coin (3.3 coin with the "Tulip Speculation" Home City Card) per second.

The Bank has a build limit of five, which can be increased with the "Bank of Amsterdam" and "Bank of Rotterdam" Home City Cards (each increasing the Bank's build limit by 1), Coffee Trade (+2, requires the "Religious Freedom" Home City Card), and Excessive Taxation (+2), for a total of 11 Banks.

With the unique ability to produce infinite coin at a startling rate, Banks allow the Dutch to focus their Settlers on collecting food and wood, use Markets to their advantage and buy up large amounts of resources if a quick age jump is needed, and hire endless streams of mercenaries more easily than other civilizations (via the Saloon or infinite shipments of Carib Blowgunners, Fusiliers and Privateers).

In the Definitive Edition, revolting to South Africa increases the coin generation rate of Banks by 10%, or to 3.025 (3.63 if "Tulip Speculation" is sent before revolting) coin per second.

As Banks are unique to the Dutch, only technologies that they have access to are shown in the following table:

As Banks are unique to the Dutch, only their cards and other civilizations' TEAM cards are shown in the following tables: 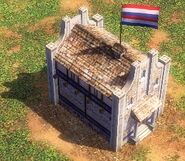 An in game Bank
Community content is available under CC-BY-SA unless otherwise noted.
Advertisement