Trading Post on a Bhakti, Sufi or Udasi settlement

The Bandit Catamaran (Marathan Catamaran in Asian maps) is a small naval vessel available in some maps or after building a Trading Post on an Bhakti, Sufi or Udasi settlement in Age of Empires III: The Asian Dynasties.

Allying with the mentioned settlements grants the ability to build Marathan Catamarans, with the same stats except the the ability to train units. It's also available on some African maps.

The Indians can also receive Marathan Catamaran from shipments on coastal maps alongside Dacoits or Thuggees. Players usually use it to collect Treasures at sea. It can carry a fair amount of units, including artillery. It can attack, fish (though it is as inefficient as canoes), transport units and train pets, Dacoits, and Thuggees if they are available at Saloon/Monastery.

Catamarans have weak firepower against ground units and other ships, but they fire from a good distance when compared to Musketeers for instance. Their range is the same as that of a Skirmisher, allowing them to outrange most military ground units when they are near the sea. A group of them can be used to support other war ships, as they cost no population slot, and they can also be used as a distraction for enemy ships or coast defenses. It should be noted, though, that they have low hit points and get easily destroyed by other ships. Their siege damage, though, is nearly half that of an upgraded Caravel and they perform well for their cost against buildings, especially Docks.

Catamarans are a good support unit for military ships and bear great siege damage for their cost. Their high range allows them to fire at units with lower range on ground without putting themselves in danger.

The Catamaran must be close to the shore to train the units, and will also be unable to move and attack while doing so.

2.0
There is also the Treasure Guardian variant of the Catamaran. It is usually featured in large area of seas surrounding a rather abundant Treasure. 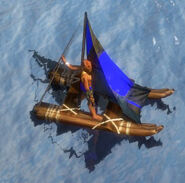 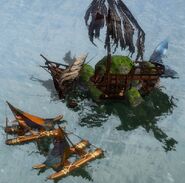