6
The Bandit is an untrainable infantry unit in Age of Empires II: Definitive Edition. It is only available in the Scenario Editor.

They are visually identical to and have the same speed as Militia units; however, they have more attack strength, a faster attack speed, and less pierce armor than Militia units.

In the Forgotten,there is also a unit called Bandit,which can be found in Gaia unit,but this was cut in latter patches. 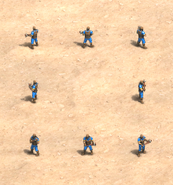 A group of Bandits.
Add a photo to this gallery
Retrieved from "https://ageofempires.fandom.com/wiki/Bandit?oldid=314709"
Community content is available under CC-BY-SA unless otherwise noted.