Rise of The Rajas

The Ballista Elephant is the unique unit of the Khmer in Age of Empires II HD: Rise of the Rajas. It is a mounted siege unit that fires bolts like a Scorpion. Ballista Elephants are one of only three siege types that can cut down trees, along with the Trebuchet and the (Siege) Onager.

The Ballista Elephant combines abilities of a siege weapon and a cavalry unit, combining as a result the advantages and disadvantages of both. Monks can heal them and convert them without the need of the Redemption technology, and are vulnerable to common cavalry counters like spearmen and camels. This can be a huge drawback, especially considering the mediocre attack and negative armor the Ballista Elephants have against them. As Ballista Elephants struggle against units with high pierce armor, Eagle Warriors are also surprisingly effective against them. Further, Flaming Camels deal bonus damage for a total of 200 damage (before armor and blast distance are taken into account) against Elephant units, and are thus extremely lethal against packed groups of Ballista Elephants, unless they are prevented from making contact by a meat shield in front or destroyed at a distance.

Unlike the Scorpion, the Ballista Elephant can cut down trees. This can be incredibly useful on maps with dense forests such as Black Forest or Arena, especially considering that they are the only unit available in the Castle Age that is able to do so. However this is time-consuming, as only a single tree is cut with each shot.

Ballista Elephants are valuable in many situations as a support unit, its high amount of hit points enables them to act as meat shields and soak heavy damage allowing them to harass Castles and Towers. Unlike other non gunpowder siege weapons, Ballista Elephants have an attack bonus against ships that allows them to support the defense of a shoreline. In any case, Ballista Elephants should be deployed with an escort in order to take down potentially dangerous counter units. Mixing Scorpions and Battle Elephants with the Ballista Elephant along Light Cavalry is the best way to pair them.

Despite the quirks that can make them shine in certain situations, Ballista Elephants are far from the ultimate units to go for a Khmer player in both single player matchup games and team games. As a result, players should not rely entirely on them. Firstly, they are created at Castles and are expensive. Secondly, Khmer Battle Elephants perform much better as meat shields and raiders, since they move faster, have a much higher melee attack with trample damage, and resist enemy attacks better, but mixing some Ballista Elephants in the back may aid Battle Elephants in the front. Thirdly, Ballista Elephants are subpar in terms of damage output compared to other ranged units. In their fully upgraded form they only have 10 attack (still poor with pass-through damage and the Double Crossbow technology) coming from a slow Rate of Fire of 2.5, and a range of only 6 because they do not benefit from archery upgrades. Ballistics do not affect Ballista Elephants either, which enables other ranged units to utilize hit-and-run tactics. In addition, Khmer Scorpions perform better than Ballista Elephants in terms of damage output, with 17 attack, 9 range, and Double Crossbow. In comparison with the Scorpion, Ballista Elephants have no minimum range, are bulkier and move slightly faster so in many cases they have a better chance to survive a pitched battle.

As Ballista Elephants are unique to the Khmer, only technologies that are available to them are shown in the following table:

The elephant is one of the most important military animals in the Khmer era. The Chinese writer Ma Duanlin claimed that Suryavarman II (1113-1150) had a force of no fewer than 200,000 elephants. Several surviving reliefs from 12th and early 13th centuries also show that the Khmer mounted ballistae or crossbows on elephants, at least experimentally.[1]

A group of Ballista Elephants

Ballista Elephants can use their missile to cut down trees

A Ballista Elephant being healed by a Monk, a unique trait for a siege unit.

Ballista Elephants defending a Khmer base against Rattan Archers 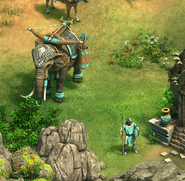 Ballista Elephant alongside of a Skirmisher in the Definitive Edition 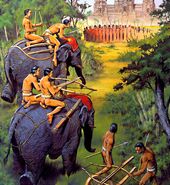 An artist's depiction of ballista elephants 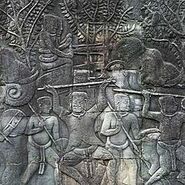 Ballista Elephant in the HD Edition and Definitive Edition