The Ballista (plural Ballistae) is a siege unit in Age of Empires. It has a strong attack and fires twice as fast as the Stone Thrower and its upgrades, but is very fragile and should be supplemented with non-siege weapons when sent into battle. Despite being siege units, Ballista does not deal bonus damage against buildings. This unit is the predeccesor of the Scorpion of Age of Empires II .

The Ballista, like other siege weapons, is built at the Siege Workshop. This ranged weapon can be upgraded into the Helepolis during the Iron Age.

While less powerful than the Stone Thrower, it is more effective against units, having a faster projectile and a faster firing rate as well, which make them a good counter to infantry and Priests.

The Ballista is an uncommon unit, and it is only available to some civilizations: 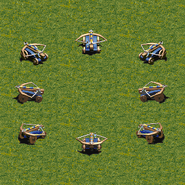 A group of Ballistae 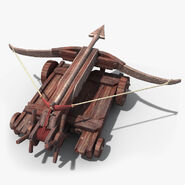 A 3D model of a Ballista 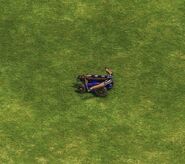 A Ballista in the Definitive Edition
Add a photo to this gallery
Retrieved from "https://ageofempires.fandom.com/wiki/Ballista_(Age_of_Empires)?oldid=238244"
Community content is available under CC-BY-SA unless otherwise noted.