Deceased (historically)
Alive (as of Raid in Delhi)

When first encountered Bahadur Shah is a political prisoner of the East Empire Trading Company. He is being held due to his claim on the throne of India. The Company finds it easier to keep him silent and the populace in check when their leader is behind bars. Once freed, he takes the role of the leader of free India, whereas Nanib Sahir continues to serve as general of the Indian national resistance.

Bahadur Shah appears in the Raid in Delhi scenario, being guarded an Agra Fort wonder. Once the Agra Fort is destroyed, he will fall under the control of the player. The player can recruit military units by taking him into the marked rally points.

Bahadur Shah cannot attack and the player will be defeated if he dies (despite of collapsing like heroes would). 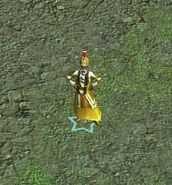 Emperor Bahadur Shah as he appears in the game.
Community content is available under CC-BY-SA unless otherwise noted.
Advertisement