Age of Empires Series Wiki
Register
Don't have an account?
Sign In
Advertisement
in: Myth units, Age of Mythology, Mythic Age,
and 3 more

16 feet
The Azure Dragon is a Mythic Age myth unit in Age of Mythology: Tale of the Dragon. It is available to the worshipers of Ao Kuang.

Despite having high pierce armor, Azure Dragons are not as effective against buildings as they do not deal Crush Damage and their Special Attacks cannot be used against them. However, thanks to their equally high hack armor, high hit points and decent attack, they are very effective against human soldiers. Their special attack actually hits several units at once, thinning out enemy forces and making it easier for the player's army to finish them off. They also have high speed and can accompany cavalry units in late game raids. Their special attack, especially when upgraded, can deal enough damage to instantly kill worker-type units.

On maps such as Midgard or Yellow River, Azure Dragons can also be used to regain or maintain control of the water as they are amphibious and can accompany ships in naval warfare. Should players have food shortage, they can be trained in the place of their naval counterpart, the Dragon Turtle. Actually, players may choose Azure Dragons over Dragon Turtles to harass enemies regardless as they take up less population and can retreat onto land to be healed by a Monk.

The Azure Dragon, also known as Qing Long, is a mythological creature which represents the Wood element, spring, and rules over the Eastern direction, which is why it is also sometimes called the Azure Dragon of the East. 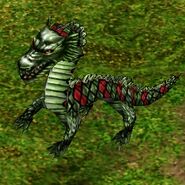 Wikipedia has an article about:
Azure Dragon
Community content is available under CC-BY-SA unless otherwise noted.
Advertisement