The Aztec War Chief is a melee infantry hero in Age of Empires III: The WarChiefs. In standard random map games, the Aztecs start with an Aztec War Chief. It explores uncharted areas of the map and has some special abilities to help himself and his tribe.

The Aztec War Chief doubles the experience bounty from kills made by friendly units in a radius of 24 around him. As all War Chiefs do, he can convert treasure guardians, detect stealth units, claim Treasures and build Town Centers and Trading Posts. Like other explorer-type units, the Aztec War Chief will collapse instead of dying and can be rescued once he recovers enough health, although the War Chief Dance at the Fire Pit allows the player to return him there after a while as well as increasing his hit points.

Nature Friendship: Converts a treasure guardian to the Aztec War Chief's side with the process taking 4 seconds to complete. 90 seconds cooldown.

Swashbuckler Attack (requires The Chief Tribal Council member): The Aztec War Chief performs a sweeping hand attack that does 60 (180 against treasure guardians, 15 against villagers, 6 against Spies and Ninja) melee damage to the target enemy and all enemies in a radius of 3 around him. 90 seconds cooldown.

The Aztec War Chief is automatically upgraded in every Age up.

As the Aztec War Chief is unique to the Aztecs, only technologies that they have access to are shown in the following table:

As the Aztec War Chief is unique to the Aztecs, only their cards and other civilizations' TEAM cards are shown in the following tables:

"The most densely populated region of the New World in 1492 was Mesoamerica, the region where North and Central America meet. Among the people living there were the Aztecs (also known as Mexica or Tenocha); they built a complex civilization centered around their great city of Tenochtitlan (modern Mexico City). This was one of the largest cities in the world (with an estimated population of 200,000) and arguably more beautiful and cleaner than most contemporary European capitals.

In Aztec society, membership in the calpulli established each individual's religious and secular schooling, as well as how they would be trained in warfare. The men of a calpulli served together in battle and on the numerous public works projects. Their soldiers wielded weapons of wood and stone, and they often sought prisoners to be sacrificed in religious ceremonies." 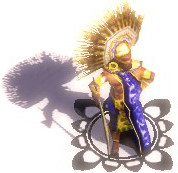 The image from the history section 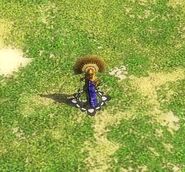 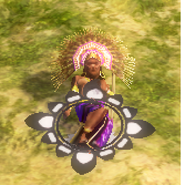 Industrial Age Aztec War Chief; lethal versus archers and cannons, respawns in 10 seconds using the Fire Pit
Add a photo to this gallery

In other languages Edit

Retrieved from "https://ageofempires.fandom.com/wiki/Aztec_War_Chief?oldid=275716"
Community content is available under CC-BY-SA unless otherwise noted.