The Aztec Eagle Warrior is a light ranged infantry native warrior in Age of Empires III that can be trained at a Trading Post built on an Aztec settlement.

After The WarChiefs expansion where the Aztecs become a playable faction and replaced by the Zapotec as a minor native, the Aztec Eagle Warrior was succeeded by the Eagle Runner Knight. However, they are still present in the campaign and Scenario editor, and can be rescued from treasures in Sonora and Yucatán.

Because of an apparent oversight from the developers, in The WarChiefs and The Asian Dynasties, the Aztec Eagle Warrior keeps its Light Infantry tag, despite the new definition of this tag in these expansions, making it weak against heavy infantry.

The Legendary Native Warriors improvement is available at the Capitol. 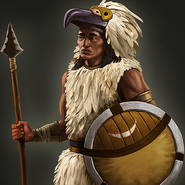