Age of Empires Series Wiki
Register
Don't have an account?
Sign In
Advertisement
in: Age of Empires, Infantry, Tool Age

Clubman
The Axeman is an infantry unit in Age of Empires. It is an upgrade of the Clubman and is statistically among the strongest units of the Tool Age. The Clubman is upgraded to Axeman by researching Battle Axe.

In large numbers they can be effective, although in the Bronze and Iron Age they are easily outclassed by other Barracks and Academy units.

They are not effective against Bowmen because they move too slowly to approach before being killed. However, they are very effective against Villagers and later siege weapons. They tend to dominate the Tool Age for offensive capabilities but are quickly overpowered later in the game, and are best used as trash units in multiplayer games that exceed 75 population.

Axemen from all eight players

A group of Axemen in-game

Two Axemen attacking a Villager in the Definitive Edition 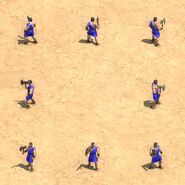 An Axeman in the Definitive Edition
Community content is available under CC-BY-SA unless otherwise noted.
Advertisement