The Axe Rider is a melee heavy cavalry in Age of Empires III: The WarChiefs that is unique to the Lakota and can be trained at the Corral.

The Axe Rider has a higher attack than most other cavalry units, making it quick and efficient at killing Shock Infantry. However, Axe Riders also have relatively low hit points (before upgrades), so it is recommended to guard them from heavy infantry and ranged cavalry. Mass Axe Rider production relies on gathering a large amount of food so it is advisable to take control of the map early and secure as many hunts as possible to produce them in large numbers.

It is a good idea to combine them with Rifle Riders as they can break through the enemy's line of Musketeers and Pikemen, allowing the Axe Riders to reach the skirmishers or artillery they were protecting and eliminate them.

Due to the incredible number of upgrades and Home City shipments the Lakota have to upgrade their cavalry units, Axe Riders scale exceptionally well into the late stages of the game. When fully upgraded, they possess 675 hit points and 80 attack, while being quite cheap (with Mustangs) and only two population. This of course does not take into account any available native upgrades, team cards, auras or ceremonies.

Nature Friendship (requires the "Morning Star" Home City Card; not available in the Definitive Edition): Converts a Treasure Guardian to the Axe Rider's side with the process taking 4 seconds to complete. 90 seconds cooldown.

As Axe Riders are unique to the Lakota, only technologies that they have access to are shown in the following table:

As Axe Riders are unique to the Lakota, only their cards and other civilizations' TEAM cards are shown in the following tables: 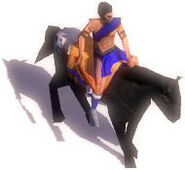 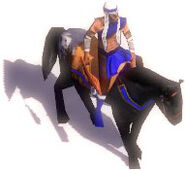 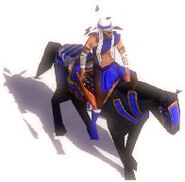 The Axe Rider from the in-game History section
Community content is available under CC-BY-SA unless otherwise noted.
Advertisement