15 feet
The Automaton is a Classical Age myth unit in Age of Mythology: The Titans. It is available to players who choose Leto when advancing in Age and looks like a primitive robot.

Repair (heal) other Automata, at a rate of 15 HP/second. When an Automaton is defeated, it does not die, but breaks instead, lying where it was struck down with 1 HP. It can then be repaired by other Automatons until it reaches full HP, at which point it can fight again. When an automaton is broken it lasts roughly 36 seconds before it dies for good.

Automata are weak compared to most other myth units, but they are very cheap and take up few population slots. This means they are easy to mass-produce, and are strong in larger groups as they can repair and rebuild each other. They are better armored and harder hitting than human soldiers and, fully upgraded, they become a decent fighting force. As the Atlanteans have a ready source of favor, it is possible to use Automatons in an early rush. Like all Myth Units, they are vulnerable to Heroes, most of which can decommission them with ease.

Kronos is especially capable of utilizing Automata, with his cheaper, faster myth units. They can be easily massed and combined with Kronos' cheap and fast Cheirobalista, or Turma. Automata do heavy bonus damage to opposing myth units, reducing reliance on expensive heroes, since worshipping Leto will not allow for access to Valor. They are vulnerable to special myth unit abilities (such as Cyclops'), so heroes may still be necessary in some circumstances.

15 feet
A special variant of Automata is featured in the Atlantis Betrayed scenario of The New Atlantis. These are animated Automaton Statues, with the intent to ambush Kastor and his allies, as well as to tear apart the helpless Atlantean citizens of the colony of New Atlantis.

Unlike the trainable version, these ones cannot repair each other and crumble completely when destroyed. They also are not affected by the Hephaestus Revenge and Volcanic Forge upgrades.

The Atlanteans placed a high value on personal freedom. They never practiced slavery. They created the Automata to perform the tasks for which many other cultures used slaves. As the sophistication of these Automata grew, some in Atlantis wanted them to become Citizens. Others opposed that notion. A civil war erupted and plunged the Atlantean Empire into a dark age that lasted thousands of years. During this time many Atlantean colonies regressed or revolted and became independent nations. Automata were never inducted into Atlantean society and Atlantis, though vastly more advanced than other nations, never again reached the heights of its Golden Age. 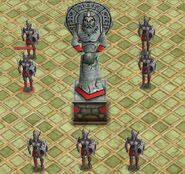 Automaton cinematic model, with a statue of Oranos for size comparison 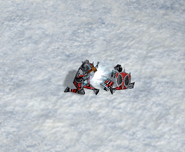 Damaged Automaton being repaired by another Automaton

Wikipedia has an article about:
Automaton
Community content is available under CC-BY-SA unless otherwise noted.
Advertisement