Age of Empires Series Wiki
Register
Don't have an account?
Sign In
Advertisement
in: Age of Empires II, Attila the Hun, Heavy cavalry,
and 2 more
English

5
Attila is a cavalry hero found only in the The Scourge of God and The Fall of Rome scenarios of his campaign, as well as in the Scenario Editor. He appears as a Cataphract. He is a must-survive unit in both of the scenarios, and in the latter, he must meet Pope Leo I outside Rome to win the scenario. As a hero, he cannot be converted and can regenerate health.

In the Definitive Edition, Attila has a new, unique sprite similar to a Tarkan but armed with a curved sword instead of a torch. The curved sword is historically inaccurate; Huns wielded straight, double-edged swords.

In the Battle Royale game mode, Attila is one of two starting hero units for the player, the other being Alaric the Goth. 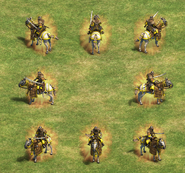 Reconstructed portrait of Attila based on Roman sources

The Attila the Hun campaign consists of 6 scenarios. The player plays as the Huns, and the player color is yellow.

Unlike other campaigns, the story is told not by a witness of the events but by a second-hand narrator, an unnamed Frankish monk from a monastery near Chalons, who is relaying them as told to him by his superior, an old priest named Armand. The cutscenes reveal that, as a young man, Armand fought on the Roman side at the Battle of the Catalaunian Fields (451 A.D.), but that he defected to the Huns after being captured by Attila, and fought by his side on the following invasion of Italy.