The Atakabune (pronounced Ah-tah-kah-boo-neh) is a military naval vessel in Age of Empires III: The Asian Dynasties that is unique to the Japanese and can be trained at the Dock once the Commerce Age is reached. It is the Japanese counterpart to the European Galleon.

The Atakabune is weak against most other warships such as Caravels and Frigates, but does well against Monitors. It is the medium ship for the Japanese, and can be seen as a combination of a Barracks, Stable, and warship.

Compared to the Galleon, Atakabunes are cheaper and tankier, but are slower and do less damage. They cost 100 more coin, train 10 seconds faster, have a training limit of 4 instead of 3, have 500 more hit points, 1.0 less speed, 2 less range and LOS, 20 less XP bounty, and 15 less damage. The other stats are the exact same.

Atakabunes are resistant to building fire thanks to the Siege Unit tag they have; Outposts and Town Centers do half their damage against them.

The Atakabune must be close to the shore to train the units, and will also be unable to move and attack while doing so.

As Atakabune are unique to the Japanese, only technologies that they have access to are shown in the following table:

As Atakabune are unique to the Japanese, only their cards and other civilizations' TEAM cards are shown in the following tables: 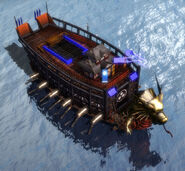