The Artillery Foundry is a military building in Age of Empires III that becomes available once the Fortress Age (Colonial Age for British, Dutch, Ottomans, and Russians) is reached. It trains and upgrades artillery and some infantry units.

Units with an asterisk (*) are added in The WarChiefs.

"The manufacture of artillery is a laborious process involving furnaces and cranes to move the heavy barrels through several stages of construction." 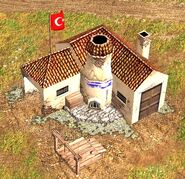 An in-game Ottoman Artillery Foundry in the Colonial/Fortress Age 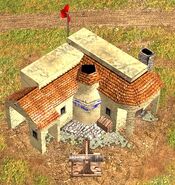 An in-game Ottoman Artillery Foundry in the Industrial/Imperial Age
Add a photo to this gallery
Retrieved from "https://ageofempires.fandom.com/wiki/Artillery_Foundry?oldid=284899"
Community content is available under CC-BY-SA unless otherwise noted.