The Arrow Knight is a siege archer in Age of Empires III: The WarChiefs that is unique to the Aztecs and can be trained at the Nobles' Hut.

The Arrow Knight has a lot of HP, is very effective against artillery and buildings, but moves at a very slow speed. Arrow Knights shoot arrows at a great distance to make up for the lack of artillery for the Aztecs.

Enemy artillery is a problem for Aztecs. Most of their units are infantry, and most artillery units deal bonus damage to infantry units, in addition to area damage. Eliminating them is a priority for Aztecs, and for that job they have the Coyote Runner, but they are less useful when the enemy player protects his artillery with cavalry or anti-cavalry units. The Arrow Knight can attack artillery units from a distance, bypassing enemy protection.

As Arrow Knights are unique to the Aztecs, only technologies that they have access to are shown in the following table:

As Arrow Knights are unique to the Aztecs, only their cards and other civilizations' TEAM cards are shown in the following tables: 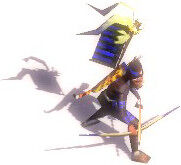 The Arrow Knight from the in-game history section