As the Arquebusier can only be trained by the Chinese, only improvements available to them (including native improvements) are listed here.

As the Arquebusier is exclusive to the Chinese, only other civilizations' TEAM cards that affects them are listed here.

"The arquebus was a European matchlock gun that was adopted by Asian cultures in the sixteenth century. When Portuguese explorer, Fenrao Mendes Pinto, accidentallly landed on the small island of Tanegashima in the Japanese archipelago in 1543, he introduced members of the Shimazu clan to the arquebus, and altered Japanese warfare forever. Within ten years, Portuguese guns could be found on every battlefield in Japan.

The Chinese began to use the arquebus at about the same time as the Japanese, although it is not as well recorded. It is generally believed that early Chinese firearms were based on designs taken from the weapons used by Japanese wokou pirates, who in turn had copied the designs of the Portuguese. Once the gun was introduced to the Chinese it became a standard issue. In 1558, Chinese gunsmiths manufactured a total of 10,000 guns for the Chinese Imperial Army." 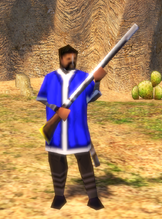 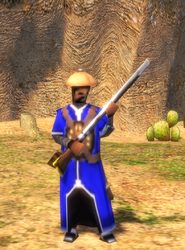 Honored/ Exalted Arquebusier model
Add a photo to this gallery
Retrieved from "https://ageofempires.fandom.com/wiki/Arquebusier?oldid=253772"
Community content is available under CC-BY-SA unless otherwise noted.