1200
The Armory is a research building in Age of Mythology. It is used to research technologies that improve the attack and armor of units, and the attack of defensive buildings. It is available to all civilizations except Thor worshipers, who have a special building, the Dwarven Foundry.

First available in the Classical Age, the Armory is a prerequisite for advancing to the Heroic Age. Armory technologies come in groups of three and mostly have identical effects. There are also many myth technologies that can or must be researched at the Armory, especially for the Greeks and Egyptians.

The Armory was a specialized metal works where iron and other materials were manufactured into tools, weapons, shields, and armor. Armory craftsmen also experimented, searching for ways to improve their wares, because armies with superior equipment could have a significant advantage in battle. 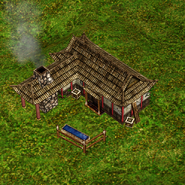 Atlantean Armory in the Mythic Age
Community content is available under CC-BY-SA unless otherwise noted.
Advertisement