Cannot be converted by enemy Monks from distance.

The Armored Elephant is a cavalry unit in Age of Empires II: Definitive Edition - Dynasties of India that is exclusive to the South Asian civilizations and takes the place of the Battering Ram line. As such, they are regional units.

All civilizations that have access to Armored Elephants can upgrade them to Siege Elephants. Despite being trained at the Siege Workshop, they are classified as cavalry units instead of siege units. As such, they are not affected by Siege Engineers (unlike Ballista Elephants) but benefit from Blacksmith upgrades, and can be converted by Monks without researching Redemption. However, Monks can convert them only at melee range like rams.

Note that all civilizations have equal armor for the Armored Elephants, 0/142 when Chain Barding Armor is researched.

The Bengali Armored Elephant is exceptionally durable, taking -25% bonus damage (in practice they take even less bonus damage since they have positive cavalry and elephant armor) and resisting conversion. It also attacks 20% faster after researching Paiks, which improves its offensive power, but not enough to make it the most effective against buildings.

Dravidian Armored Elephants are somewhat flawed, due to missing Bloodlines, Husbandry, and Plate Barding Armor. This makes their Armored Elephants slower and more fragile, but they benefit from both Dravidian unique technologies. First, Medical Corps lets them slowly regenerate hit points, helping them compensate for their lower hit points and armor. Second, Wootz Steel lets them bypass armor when attacking. This is not enough to let them defeat most enemy units in a cost-effective manner, but it does make them better equipped at defending themselves against enemy infantry and cavalry than other Armored Elephants.

Gurjara Armored Elephants are the best at demolishing buildings, due to dealing +50% bonus damage. They also cost less food once Kshatriyas has been researched, and can be created 20% faster due to the Gurjaras' team bonus. However, Gurjara Armored Elephants lack Blast Furnace, making them less well-equipped at defending themselves than other Armored Elephants. Gurjaras also get Heresy, but it is extremely situational for a Monk to convert an Armored Elephant since it must get into close range to perform a conversion, though Heresy could help against Missionaries.

Comparison among civilizations with all Castle Age upgrades[]

Comparison to the Battering Ram and Capped Ram[]

In-game, the Armored and Siege Elephants are considered cavalry with attack bonus vs Buildings, not Siege units. This has many implications, which changes the way the unit is used.

Firstly, rams cost wood, while Armored Elephants cost food. This matters, since food is harder to mass. Next, rams can garrison archer and infantry units for their protection. Garrisoned infantry units increase the speed of rams by 0.05 tiles/s/unit, taking them from 0.5 tiles/s to 0.7 tiles/s (Battering Ram), capping their speed to that of a Monk without Fervor. Armored Elephants, on the other hand, are capped at 0.66 tiles/s. Infantry units also provide +10 attack vs buildings. Battering Rams and Capped Rams have +125 and +150 attack vs buildings, while Armored Elephants have +75 attack vs buildings. Rams are repaired by villagers, but Armored Elephants are healed by Monks. Apart from being free, healing by Monks can be done from a safety of 4 tiles away. It also has a convenience factor of not having to bring a Villager to the frontline and risk losing it. This mechanic is specially useful on Arena, where Monk-siege pushes are very common.

Rams have -3 melee armor, making them take extra damage from melee units, and are especially weak to low-melee attack units like Chu Ko Nu, Scorpions, Kipchaks, Fire Galleys, and Villagers. Siege Elephants have -2 melee armor, which increases by 2 or 3 by Cavalry Armor upgrades at the Blacksmith, thus negating these low-melee attack units as counters. Capped Rams have a 1.5 tile blast radius in which they attack every building and siege unit. Battering Rams and Armored Elephants do not have a blast radius.

Monks do not need Redemption to convert Siege Elephants, since they are cavalry. They do, however, need to be in the proximity of the Elephant unit. This may be dangerous, as Monks have no armor to resist the low melee attack of the Elephant. Still, it is unlikely for a Siege Elephant to kill a Monk with Sanctity before being converted, as they would require at least 6 hits to kill the Monk.

Both units cost almost the same amount of total resources (225 for Armored Elephants vs 235 for Rams) and train in the exact same time. Armored Elephants without Bloodlines have the same hit points as Capped Rams; despite having slightly different counters, they share weaknesses in Mangudai, Huszars, Eagles, Mangonels, heavy cavalry, and heavy infantry. Despite being usable against regular units, Armored Elephants prioritize attacking buildings, just like rams; Armored Elephants do not have any blast radius, just like Battering Rams.

Comparison with Battering Ram and Capped Ram in the Castle Age[]

Pre-gunpowder siege weapons were uncommon in ancient India, and battering rams were possibly never used at all. Instead, cities and forts were taken by assault by employing elephants that had been taught to batter walls and gates. This training, called nagarayanam, is mentioned in the Arthashastra treatise of governance and statecraft. The Mahabharata also calls the elephants purabhettarah ("town-breakers") for the same reason.[1] 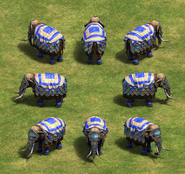