Age of Empires Series Wiki
Register
Don't have an account?
Sign In
Advertisement
in: Age of Empires, Iron Age, War elephants,
and 2 more

Iron Shield
The Armored Elephant is a heavy cavalry unit in Age of Empires: The Rise of Rome that can be trained at the Stable in the Iron Age once Iron Shield is researched.

Compared to its predecessor, the War Elephant, it does 3 additional attack against units and 2 additional bonus damage (to a total of 7 bonus damage) against buildings, which, combined with its trample damage and high HP, makes it a useful alternative to stone throwing siege weapons for civilizations lacking a well developed Siege Workshop tech tree.

Like stone throwing siege weapons, Armored Elephants do trample damage to adjacent enemy targets, although at a larger area. They are effective against infantry and cavalry but are vulnerable to conversion and quicker units that can attack at long range. Its attack cannot be upgraded and it does not benefit from Nobility; only the armor can be improved. 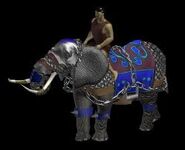 A render of the Armored Elephant model 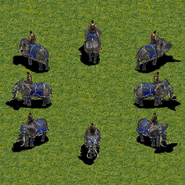 A group of Armored Elephants

An Armored Elephant in the Definitive Edition