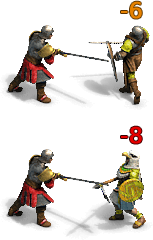 Armor classes are semi-hidden unit attributes in Age of Empires II. They are necessary to make attack bonuses work correctly.

The bonus attack and armor class system is not directly displayed in-game. The only visual element of armor classes is noticing the attack value bonuses that units and buildings inflict on each other, but even then, heavy amounts of cross-referencing of the unit and building types taking and receiving damage would have to be tediously studied; and combined with the fact that the type of armor classes assigned to each unit and building are never specified in-game. The only way to directly see armor class bonuses and their values is with the use of the Genie Editor, which is the official program to edit dataset included in game files, from where the information of this wiki is obtained.

While the tech tree states for each unit against which other unit it deals bonus damage, it does not tell the player how this bonus damage is dealt, or which unit is in which armor class. While most armor classes are intuitive (for example, it is clear that the Eagle Warrior is in the infantry class), there are also many which are not. In another example, the aforementioned Eagle Warrior is also in its own Eagle Warrior class, and Champions deal significant bonus damage against this class. Neither is referenced anywhere in the game. Another example are Camel Riders: They are not in the cavalry class like one might assume, but instead in their own camel class, which takes less bonus damage than the cavalry class, so they are less vulnerable to their counter units than the game suggests.

Simply speaking, bonus damage is a flat additive value to the base damage and if a unit has more than one armor class, the bonus damages of the attacking unit stack. For example, the War Elephant is in the war elephant and in the cavalry armor classes, and the Halberdier has an attack bonus against both classes. So both bonus damages are added when a Halberdier attacks a War Elephant.

Each unit has an armor value for every armor class it is assigned to. For most units this armor value is 0 and simply determines that they are in this class and take bonus damage, but for some units, it is non-zero. A positive value indicates that this unit (partially) resists bonus attacks against this armor class, while a negative value means it takes even more damage. For example, the Cataphract has +12 cavalry armor, making it less vulnerable to anti-cavalry attacks than other cavalry units. On the other hand, for example, the Ballista Elephant has –2 cavalry armor, making it take even more damage from anti-cavalry attacks.

The attack calculation in Age of Empires II basically works in three steps. Melee/Leitis damage, pierce damage, and bonus damage are calculated separately. The damage is calculated as following:

corresponds to the elevation / terrain bonus (×1.25 if the attacker is uphill / attacking from the cliff, ×0.75 if downhill),

represents Tatars elevation bonus of +0.25 (if attacking from uphill / cliffs) in the Definitive Edition. Separate

multiplier of ×1.2 is applied if the target building is built on a desert cracked terrain (does not apply to units).

This formula means that damage is calculated for all the attack/armor classes separately, which are then summed up and multiplied by the elevation bonus (if present), and then, if

, the damage is applied directly, or, if

, is rounded up to 1. This means that the elevation bonuses have no effect if the resulting damage is lower than 1.

The Leitis (the Lithuanian unique unit, from the Definitive Edition) has neither melee nor pierce damage assigned to it, which are instead replaced with Leitis damage (vs. armor class 31), with all the units (but not buildings) having 0 armor against this attack class. Unlike other bonus armor classes, it is not affected by the Sicilian bonus damage reduction and is thus included separately in formula (1).

is base unit melee attack,

is a civilization bonus increasing the melee attack (×1.25 damage increase for the gunpowder units for the Burgundians in the Definitive Edition),

is melee damage increase from the upgrades,

is base unit melee armor (can be negative for rams), and

is melee armor gained through the upgrades or civilization bonuses.

is an armor class,

is an attack bonus against a respective armor class,

is a civilization bonus that increases the bonus damage (×1.25 damage increase for the gunpowder units of the Burgundians and the Spearman-line of the Bohemians in the Definitive Edition) or the ×1.2 anti-Building damage increase from Siege Engineers (except Petards and Flaming Camels which have an additive bonus equal to ×1.4 instead),

is the reduction of bonus damage for the respective armor class, and

is bonus damage reduction civilization bonus for Infantry, Cavalry and Archer units of the Sicilians in the Definitive Edition set to ×0.5.

Note that multiplication and subsequent rounding after

is applied, which results in a more significant bonus damage increase (compared with stated) in case the target has non-zero armor set for the respective bonus armor class (e.g., a regular Cataphract has 12 cavalry armor). Rounding also means that low bonus damage values will not get increased by civilization bonuses or Siege Engineers (e.g., regular Scorpion receives no increased anti-building damage from Siege Engineers: ROUND(2 × 1.2) = 2).

While the formulas may look complicated at first glance, it basically says that a specific armor class armor is subtracted from its respective bonus attack, but the individual result cannot be negative. This resulting value (positive in most cases) is added to the total damage dealt. Bonus attack cannot be reduced by melee or pierce value.

Unlike with melee and pierce damage, information about the bonus damage cannot be found in the unit infobox or in tech tree in-game.

All three parts in that calculation can be negative if the target has higher armor than the attacking unit has attack. As the formula shows, in that case every part is rounded up to zero, so one weak spot cannot be compensated, and the minimum amount of overall damage dealt is always 1. The example below shows this as well as an attack involving negative armor, both melee and pierce attack, and a multi-shot attack. The calculation follows the patterns mentioned above.

This example shows the importance of the hill bonus damage and shows the additional armor the Cataphract has against the natural counter of cavalry.

A fully upgraded Burgundian Hand Cannoneer has a base pierce attack of 17, no melee attack, and an attack of 10 against Infantry.
It has also a civilization bonus that modifies all existing attack classes of the unit (Hand Cannoneer receives ×1.25 damage multiplier towards its pierce damage, anti-infantry damage, and anti-spearman damage).
A fully upgraded Malian Condottiero has a melee armor of 1+3, a pierce armor of 0+7, and an Infantry armor of 10.
If the Hand Cannoneer hits the Condottiero it deals: (ROUND(17 * 1.25)-(0+7) {pierce}) + (ROUND(10 * 1.25)-10 {Infantry}) = 17 damage instead of the regular 10 damage.

A Bohemian Spearman with no upgrades has a base melee attack of 3, no pierce attack, and an attack of 15 against Cavalry.
It has also a civilization bonus that modifies all the bonus attack classes of the unit (Spearman-line receives ×1.25 damage multiplier towards its anti-cavalry, anti-elephant, anti-camel, anti-ship, anti-Mameleuke, anti-Eagle warrior and anti-Standard Building damage).
A Sicilian Scout with no upgrades has a melee armor of 0, a pierce armor of 2, and an Cavalry armor of 0.
If the Spearman hits the Scout it deals: (3-0 {melee}) + ((ROUND(15 * 1.25)-0) * 0.5) {Cavalry}) = 12.5 damage inflicted in 13–12–13–12… increments.
The Scout receive 50% less bonus damage as consequence of the civilization bonus.

These examples show the application of the civilization bonus damage of the Burgundians and Bohemians on the Gunpowder units and Spearman-line, respectively. As unit armor classes are applied after the multiplication takes place, in cases with existing armor the bonus ends up being higher than +25%. Unlike the elevation bonus where the decimal part is stored for each attack, the resulted bonus damage from the civilization bonus is rounded for every armor class (rounded up if the decimal part is 0.5) to the nearest integer and remembered as such for every attack. Both the elevation bonus and the Sicilian bonus damage resistance are applied after the rounded bonus damage and both preserve decimal figures.

Base armor is the default value of an armor class which a unit does not have. This is an important attribute to make armor classes function.

The single highest attacks in the game are those by Furious the Monkey Boy against standard buildings (999) and Secondary Projectiles of Organ Guns and Hussite Wagons (1002)* .