"Did I mention that I am a god now?"
—Arkantos Uber's taunt in multiplayer mode

Arkantos (uber) is the demigod form of Arkantos after being blessed by Zeus in Age of Mythology. Given his high armor rating, powerful attack, and quick health regeneration, he is almost impossible to kill.

Arkantos (uber) appears only in A Place in My Dreams, the final scenario, when the player is granted the 'Blessing of Zeus' god power, which is cast on on Arkantos (hero) to turn him into Arkantos (uber). He is used to defeat the Living Poseidon Statue, which is too powerful to defeat via regular means.

At the end of the Fall of the Trident campaign, Athena raises Arkantos, who had died after Poseidon in a rage destroyed Atlantis, to true godhood.

Fires lightning bolts from his body and swings around his spear, sending enemy units flying away, causing damage. This works on all human units plus the following humanoid, infantry-like myth units: the Anubite, Cyclops, Einherjar, Minotaur, Scorpion Man, Mummy, and Avenger.

Arkantos of Atlantis was born during a time of great turmoil. His homeland was under constant siege by enemy armies and often seemed on the verge of losing not only the colonies it had fought hard to establish, but also the very home island of Atlantis. Arkantos took up spear and shield at an early age, and quickly earned a reputation as a great leader and one favored by Poseidon, the Father of Atlantis.

By the twilight of these great wars, Arkantos had become so indisputably skilled in waging war that the Council of Atlantis named him admiral and placed him in charge of their entire military. With the homeland again safe, Arkantos embarked upon a campaign to search out and eliminate any enemies who still remained. Finally, there was no enemy capable of challenging Atlantis. In a time of peace, maintaining a large army no longer seemed necessary and Arkantos himself seemed a relic of a bygone age. Kept around largely for gratitude for years of service, Arkantos now commands only a token force to fight off the rare bandit or pirate, including those that killed his wife and left his son, Kastor, as his only heir.

It seemed that Arkantos' days of glory had ended. But fate had something different in mind." 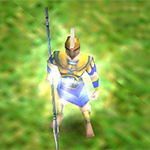 Arkantos blessed by Zeus in Fall of the Trident

Arkantos (Uber) with Cerberus
Add a photo to this gallery
Retrieved from "https://ageofempires.fandom.com/wiki/Arkantos_(uber)?oldid=268880"
Community content is available under CC-BY-SA unless otherwise noted.