Age of Empires Series Wiki
Register
Don't have an account?
Sign In
Advertisement
in: Age of Mythology, Atlantean heroes, The Titans, Infantry heroes

Living Poseidon Statue (25)
Myth units (10)
Set Animals (3)
Human soliders (7)
Arkantos (god) is the god form of Arkantos. Given his high armor rating, powerful attack, and quick health regeneration, he is almost impossible to kill. His stats are identical to his uber form, but he has a different appearance.

Throws numerous enemy units at a time into the air causing 200 hack damage and briefly stunning them. Recharge time: 15 seconds.

In A Place in My Dreams, the final scenario of the Fall of the Trident campaign, Arkantos fights the Living Poseidon Statue, after he is being empowered by the Blessing of Zeus, and eventually beats it and Gargarensis (who is impaled by the crumbling statue's trident).

After this victory, an enraged Poseidon destroys and sinks the island of Atlantis, also killing Arkantos. However, Athena resurrects him, and he ascends into true godhood, and is tasked with keeping the Titans in check.

In The New Atlantis, he takes on the role of Athena served in Fall of the Trident; guiding his son, Kastor through his quest to imprison the Titans. 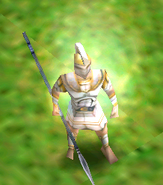 Arkantos in his god form