Age of Empires Series Wiki
Register
Don't have an account?
Sign In
Advertisement
in: Atlantean units, Myth units, Age of Mythology,
and 2 more

18 feet
Argus is a Mythic Age myth unit available to the Atlanteans in Age of Mythology: The Titans through worshipping Atlas.

Argus is capable of spewing an acid pool at an enemy and drowning them in it. Once the attack has been used it takes approximately 19 seconds to regenerate the ability.

In combat they are fairly powerful melee units with an attack bonus against other Myth Units and high armor. Argus can easily defeat most human soldiers, but in terms of damage output they are fairly weak compared to other Mythic Age Myth Units. To make up for this, they have a special attack in which they can regurgitate green acid which deals instant death to all units other than heroes and Titans.

Like other Myth Units with an instant kill attack, they should be micro-managed to target the strongest units in an opponents army. Unlike other Mythic Age Myth Units with an instant kill attack, Argus has to get upclose to its target. This leaves it at a disadvantage if their targets can keep their distance and even take it out with a ranged attack. To make matters worse, the Argus is a large Myth Unit, meaning it can be attacked from several angles and killed rather quickly if overpowered due to its rather low HP. As Atlas is a defensive God, it is recommended to use Argus defensively and have it protect important buildings from Siege Weapons or other Myth Units. As with all Myth Units they are weak against Heroes.

Apart from being used in micro against Myth Units, especially Colossi, one may take advantage of the great LOS of a fully-upgraded Argus for reconnaissance. In maps with many chokepoints, such as Jotunheim or Marsh, this can be very beneficent, combined with a turtling strategy, based on Atlas' tougher structures; they may also act as a "spotter" for Cheiroballistae and Arci. Not only that, but they can assist in ambushes, where the Argi target the strongest units in an attacking group, retreat and let other units in an army to fight the rest (until the ability recharges, if they are in danger of dying).

In higher-level games, Atlantean players will often place their Citizens near garrisonable buildings, which makes raiding their economy very difficult. The Argus and other instant-kill myth units are effective at raiding Citizens in this situation because the instant-hit attack gives Citizens no time to garrison.

Hera's Argus served her faithfully until he was killed by the god Hermes. Zeus had commanded Hermes to trick Argus and slay him so that the philandering god could recapture one of his lovers, Io, from his jealous wife. Hera honored the sacrifice of Argus by placing his eyes on the tail of her sacred peacock. Io, who had endured all this in the form of a pure white cow, was saved only to plunge into what is now called the Ionian Sea.

Original Argus icon from the Age of Mythology pamphlet 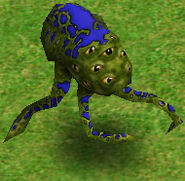