Age of Empires Series Wiki
Register
Don't have an account?
Sign In
Advertisement
in: Heroic Age, Atlantean units, Age of Mythology,
and 2 more

20 feet
The Arcus is the standard Atlantean archer unit in Age of Mythology: The Titans. It can be trained at the Military Barracks starting in the Heroic Age. It is notable for its long range.

Arci are best used against infantry units, especially in groups. With the longest range of any archer unit (with the exception of Hades' Gastraphetes) they can pick off infantry units further away than other ranged units, making it even more difficult for them to close the gap. However they are fragile and can quickly be killed by units that can quickly get close to them, such as cavalry.

All Atlantean citizens were practiced in the use of at least one weapon. Those who showed skill with ranged weapons - slings, bows, javelins - were called into the ranks of the Arcus. The Atlantean Arci were the first effective military use of ranged foot soldiers. Slings eventually fell into disuse and javelins became more feasibly wielded from horseback. the focused and deadly Arcus that emerged over time was a master of the bow and any number of Arci fielded in battle gave their opposition great pause.

20 feet
Like all Atlantean human units, an Arcus can be converted into a Hero at any time, provided the player has sufficient resources.

Close up of Arcus with upgrades.

The Arcus cinematic model. Note his shield, with the trident symbol.

An Arcus and an Arcus (Hero) firing at a target at the same time and distance. The Arcus (Hero) has a lower frame delay than the regular Arcus.

Original Arcus icon from the Age of Mythology: The Titans booklet. 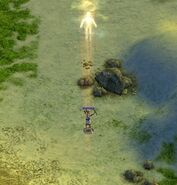