Age of Empires Series Wiki
Register
Don't have an account?
Sign In
Advertisement
in: Article stubs, Age of Empires II, Maps,
and 2 more

A group of large islands. You might not be the only inhabitant of yours.

The map consists of a series of islands surrounded by a large ocean. Most of the resources are limited, due to the fact that the islands are smaller than regular landmasses. Some players start the game on an isolated island, others share an island with another player that could be allied or enemy or an island that extend to the corner with some wood, gold, stone, berries, and Deer. The majority of a player's food should come from the water to preserve wood stockpiles. A very important note would be the resource islands. Typically, Archipelago contains four extra, smaller islands. Two are mostly barren, but the other two contain very large amounts of gold, wood, food, and stone. Locating these islands and exploiting their benefits should be a top priority for all players.

The initial food natural resources around initial Town Centers are the standard ones (8 sheep or 6 cows, half near, half hidden at a distance, 2 aggressive huntables, 4 passive huntables, 6 Berry Bushes), but considering this is an island setting, sometimes the coast will also be relatively near the initial positions, allowing for getting shore fish early on. Initial Stone and Gold mines are standard.

It has the in-game map tag of "Water".

Early standard land rushes (such as infantry, cavalry, or archer rushes) are sometimes viable (depending if the initial island leads to an opponent's settlement). Also, Galley rushes and Landing-to-rush strategies are very possible. An early rush can displace an enemy player and secure a friendly base in the island, allowing the rushing player to use the resources from the other island, effectively adding to their resource stockpiles.

Defending and turtling on Archipelago is also very viable, especially for civilizations with good towers. Booming is also possible, but it may require the player to first perform a turtle and place buildings near the shoreline for getting sight and preventing unexpected enemy landings.

Trash wars are common in long games on this map, as island maps have less resources available (aside from food), and they can be depleted more easily than on a land setting

Controlling the water is very important in Archipelago. Also, the player or team that gains control of the islands in the center can get an economic edge over their opponents, so finding those and taking them may be a priority, especially in the middle game when players can make secondary Town Centers.

Civilizations with advantages here include:

Civilizations that may struggle

Much like the Age of Empires II version, Archipelago features a highly unpredictable map, where players may start alone or share with their teammates the same island, or in separate islands, but slightly connected by a land bridge. Control of the waterways is highly important, as the islands have limited animals, forcing players to focus on fishing and rushing, with both naval and land units.

Some of the uninhabited islands and islets on the map may or may not have Gold Mines, so it is imperative to scout well the seas for potential resource pools. The fauna in this map is common to the Mediterranean region, including Wild Boars Deer and Mahi-mahi in the waters (as well as non-interactable Orcas). The forests in the region are composed of palms.

The best major gods for this map are ones who offer naval or scouting bonuses as well as the right minor gods, who provide in turn naval myth units and/or naval Myth Technologies.

Odin in particular is one of the best choices, as he spawns Raven scouts on the Temple, excellent for searching resources on uninhabited islands, and provides multiple Minor Gods who boost the Norse navy: Heimdall, Njord, Tyr, and Baldr.

Archipelago with two teammates on the same island

Archipelago version with two teammates on separate islands, but slightly connected through a small land bridge 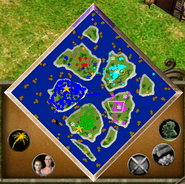 Archipelago with five players where no islands are connected

Archipelago is a type of random map in Age of Empires III: Definitive Edition - Knights of the Mediterranean.

Archipelago is a type of random map in Age of Empires IV. 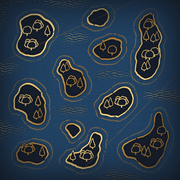