The Arbalester (called Arbalest before the Definitive Edition) is an archer unit in Age of Empires II that can be trained at the Archery Range once the Imperial Age is reached. It is the final tier in the Archer line.

The * indicates that the civilization can fully upgrade their Arbalesters, i.e. gets Bracer, Ring Archer Armor, and Thumb Ring. Faith and Heresy are not taken into account because they only contribute to their combat strength in a very situational manner.

The ^ indicates that the civilization has at least one civilization or team bonus or a unique technology that benefits the combat strength of the Arbalester.

Arbalesters work better in large groups as they can fire arrow volleys at the opponents' units. Arbalesters are very good at slowing down massed infantry, as well as inflicting severe damage. They are vulnerable to cavalry as they can close the distance with the fragile Arbalester before taking too much damage. Coustilliers are an extremely dangerous counter, as their charge attack can kill them with one shot of any non-Vietnamese Arbalesters. As such, they should be deployed with an escort.

Pairing Arbalesters with Halberdiers works especially well since the Halberdier can cover the Arbalester's main weakness that is cavalry. Pairing the Arbalester with other melee units can also protect them from siege units.

If playing defensively, Arbalesters can become a good tool to protect a walled area as they can attack enemy units from behind the Wall at a relatively safe distance, even protecting themselves from melee cavalry. However, they do almost no damage to rams.

Arbalests were a particularly heavy and powerful type of crossbow developed in the mid-to-late Middle Ages. The naming this class of soldier an "Arbalest" is incorrect since the word denotes the weapon instead of the wielder. It would be more correctly referred to with the name "Arbalist", which refers to a person that shoots the crossbow.

The Archer line, with the Arbalester on the right.

The Archer line, with the Arbalester on the right, in the Definitive Edition. 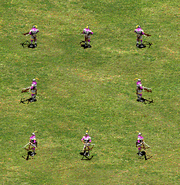 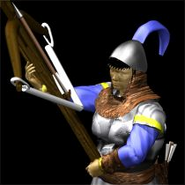 A render of the Arbalester model